It’s been a little over a week with Donald Trump as President of the United States, and millions have already taken to the streets to protest his various policies. Whether it was the approx. 4 million people who took part in the Women’s Day march – the largest one day protest in American history – or the thousands that are currently swamping airports across the country in protest of his Muslim Immigration Ban, people are eager for ways to defy the new administration.

The website grabyourwallet.org provides a detailed list of every company that carries Trump products, has donated to the Trump campaign, or has CEO’s that publicly endorsed Trump. We’ve included eleven of the more recognizable brands below for those eager to send a message that the Trump brand is now poison to any that supports it.

Amazon sells Trump brand shoes, clothing, and home furnishings. Given Amazon’s dominance of the online shopping marketplace, they are one of the Trump family’s most lucrative sources of online income.

Uber CEO Travis Kalanick is a member of Trump’s Economic & Policy Forum, which he says he took based on his “belief that by speaking up and engaging we can make a difference.”

Its competitor Lyft, by contrast, has pledged to donate $1 million over the next four years to the American Civil Liberties Union, which successfully stopped the deportation of detained immigrants from Trump’s banned Muslim-majority countries.

Yuengling CEO Richard Yuengling Jr publicly endorsed Trump during the election, telling Eric Trump “Our guys are behind your father. We need him in here.” 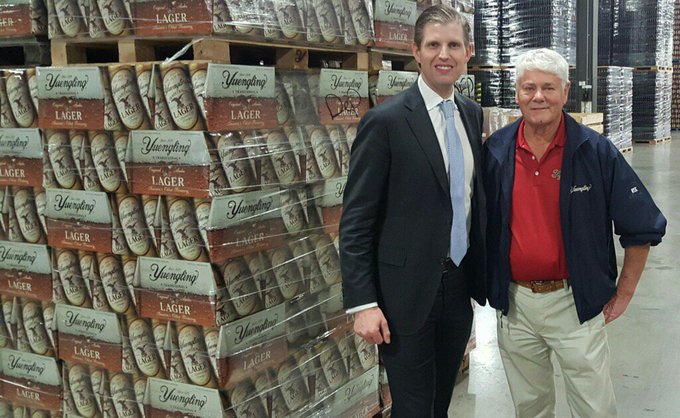 MillerCoors Chairman Peter Coors hosted a top-dollar fundraiser for the Trump campaign, the cost of attendance priced at $10,000 per couple, with VIP tickets costing $50,000.

“Donald Trump is a fighter and I know he will fight for this country,” White said.

The extreme Christian CEO of Hobby Lobby David Green initially supported Marco Rubio during the Republican primary, saying Trump “scares me to death.” But he later endorsed Trump over Hillary because he was under the impression that “Clinton has made no secret she believes government interests supersede the protection of religious liberty.”

A Mexican-American has also reported being discriminated against at a Hobby Lobby location, with an employee saying “Trump won the election, I don’t have to help you.” After calling the manager, she and her friend was told that there was “no proof that this interaction took place and that no action would be taken.” The Communications Director of Hobby Lobby has since said they would investigate these allegations, though no updates have been made public.

Elder Beerman currently sells Ivanka Trump’s clothing line at its stores all over the country.

Walmart sells Ivanka Trump brand shoes, clothing, and fragrances at their many stores across the country. Walmart also gave $150,000 to Trump’s inaugural committee and sponsored a ball celebrating the inauguration.

Sears sells Trump home furnishings and fragrances, as well as Ivanka’s shoes and clothing lines. Trump’s pick for the secretary of Treasury, former Goldman Sachs executive Steve Mnuchin, was also on the board of director’s at the struggling retail outlet.

By contrast, Zappos’ competitor shoes.com removed Ivanka Trump’s shoes from its inventory following mass boycotts, telling its customers that “your voices have been heard.”

For a more complete list of Trump-supporting companies, as well as their contact information, visit grabyourwallet.org and tweet #grabyourwallet to announce your boycotts to these companies.